Most of my wargaming table hills are styrofoam mounds cut with a foam cutter and flocked. I hate these hills. They're messy and a bit fragile. I hosted a gaming session with a few friends from out of town. They supplied the terrain and gaming pieces. The one thing that caught my attention was the hills they used. These things were indestructible! To demonstate this one hill was banged quite hard on the back of the chair. Amazing! 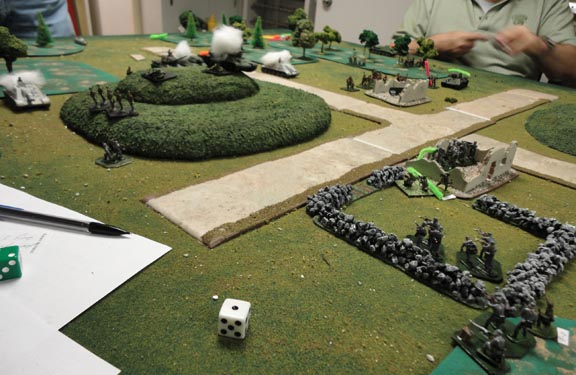 The photo above shows one of the hills in action. So how are they made? The list of ingredients is the following:
The upholstery foam is a bit of a bugger to cut. I found an electric carving knife (used for slicing up the turkey) works best. Once you have the shape of your hill place it on a flat surface. Make sure it's flat to the surface. Now take your terrycloth towel and drape it over the foam. Take your glue gun and lift up the towel at one end and start gluing it down to the foam. Now trim the towel around the edges of the foam hill. Make sure you leave at least a 1/2" past the foam edge.
The next step is to fill a pint size container with 50/50 ratio of white glue and water. Brush this mix over your terryclothed hill. Let dry over night. It will be hard to touch but have some flexibility in it.
The last step is spray painting it. I used 2 shades and later dry brushed on some lighter colours to highlight the cloth texture.
For more details on how to make these please see my friend's blog.
Hill making 101

The great thing about these hills is how cheap it costs to make. I bought my towels at a dollar store for a few bucks. You will go through a lot of hot glue sticks and white glue. I recommend you invest in a good glue gun. It will make it easier. I think I made about 7 hills for a combined cost of $10.
I highly recommend this technique. Give it a try!
Posted by Canuck Bud at 11:10 PM 1 comment:

Email ThisBlogThis!Share to TwitterShare to FacebookShare to Pinterest
Labels: Terrain

Get across the bridge!

I'm still working on my home grown rules and as you know you have to play test and play test. Once you've done that you play test again!
So the scenario I picked was a fictional one in a historical setting. Western France '44. The allies have to get control of some cross roads at a shelled out town. An earlier recce patrol spotted a platoon of Germans in the town with unknown support.
The Allies consist of a mix of numerous equipment. 2 Canadian infantry squads, 1 American squad, and lots of tanks! Remember I'm testing my ruleset so I've included a mix of equipment that normally wouldn't be seen together. The mix consists of 4 Shermans, a Firefly, and a few Churchills.
The only way across for armour is the bridge. The infantry can ford across at a couple of crossings.
Once it was determined that the bridge isn't mined and a ford to the right of it isn't guarded the Allies rush ahead. What they didn't realize was that a squad of Germans started to move up to the bridge while leaving a clear lane of fire for their Pak 40 gun. A Sd Kfz 250/9 was also moving up to lend support and possibly challenge any ford crossings. It was too late.
The Pak 40 makes it's presence known and immobilizes the first Sherman across. The next 2 Shermans break right and left and look for cover.
The Sherman that broke right had it's turret take a hit. A critical hit roll was required and the results where good. The driver didn't bail out but managed to back up his damaged tank over the hill and into cover. Meanwhile a squad of Fallschirmjagers rushed the hill above the ford to see if they can stop the Allied squad from getting across. They were too late and got into a nasty firefight with the Americans and were wiped out to a man. At the bridge the immobilized Sherman now had it's main gun knocked out and was out of action. In then nick of time 2 Churchill Mk VII's manage to get across the bridge.

Hiding in the back the Germans make effective use of a captured Firefly to hold back the Allies. 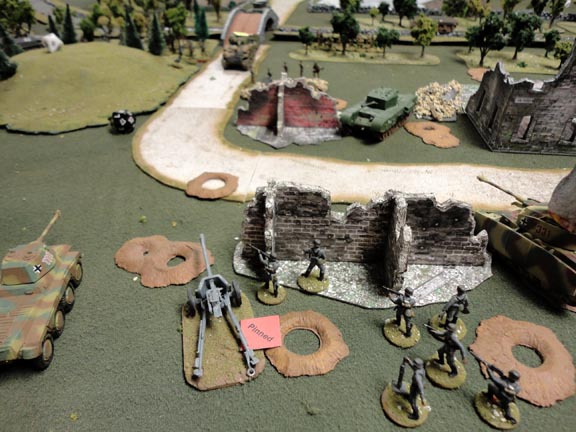 And that's as far as we got. The Allies did manage to knock out the enemy Firefly and start to move through the town. What other surprises do the Germans have?


My ruleset is coming together nice. They are squad level (1 figure = 1 man, 1 vehicle = 1 vehicle, etc). The one thing I wanted to attain was a fast pace without simplifying the rules to the point of stupidity. One way to do this is to allow combined fire by an infantry squad. Just add up all their weapon values minus the target's defense attributes and roll for each enemy figure. Armour vs armour works pretty fast too. Roll for a hit. If successful then determine the attack value vs the defense value and roll for penetration. There's more to the rules than what I briefly described. I'll have to do a more detailed description later.

So once the rules are finished I'll offer them up to whom ever wants to try them.
Posted by Canuck Bud at 10:35 PM No comments: